Election Day is now just three months away, and the overall trajectory of the race hasn’t changed much recently: Joe Biden continues to hold a sizable lead over President Trump. Biden is now up by 8 percentage points in FiveThirtyEight’s national polling average, and he has an advantage of 5 points or more in several key battleground states like Florida, Michigan, Pennsylvania and Wisconsin.

Faced with these numbers, though, a lot of people — Republicans, Democrats and people with no particular party affiliation — raise a reasonable question: “Wasn’t Hillary Clinton leading in the polls too?”

Well, yes. But not quite like this. We compared Biden’s standing to where Clinton was at this point in the polls four years ago.1 We specifically chose this point in the cycle in 2016 because it’s about where Clinton hit her peak — on Aug. 7, 2016, following the Democratic National Convention, Clinton had a 7.5-point lead over Trump in national polls.

Clinton never topped that lead. But as you can see in the chart below, even at her post-convention peak, Clinton’s lead over Trump still wasn’t as large as Biden’s is now.

This means that the sizable advantage Biden currently holds isn’t the product of a convention-induced sugar high but rather the larger electoral environment, which is very poor for Trump. That’s no guarantee Biden’s lead will hold — it’s hard to know what the post-convention bounces will look like this year, for example, given that they’re remote affairs and scheduled back to back.

But Biden seems to be starting from a better baseline than Clinton. Crucially, he enjoys a higher level of average support than Clinton ever did.

Clinton led in most national polls, but was typically garnering support only in the low- to mid-40s. Biden’s share has been hovering around 50 percent. As a result, some of the uncertainty about the trajectory of the Trump-Biden race might be reduced, in part because there are simply fewer voters who haven’t made up their minds and because signs point to fewer third-party voters than in 2016. Combined, Clinton and Trump had secured 84 percent of support, on average, in national polls in early August 2016. By comparison, Biden and Trump currently combine for 92 percent.

Things are mostly good for Biden at the state-level, too. Just as he does nationally, Biden enjoys more overall support than Clinton in each of the battleground states we looked at. But there are a couple of significant caveats: As the chart below shows, there are several key states where Biden’s margin against Trump is actually lower than Clinton’s was at this point in 2016. (Although remember, we’re comparing Biden to Clinton at her peak nationally.) 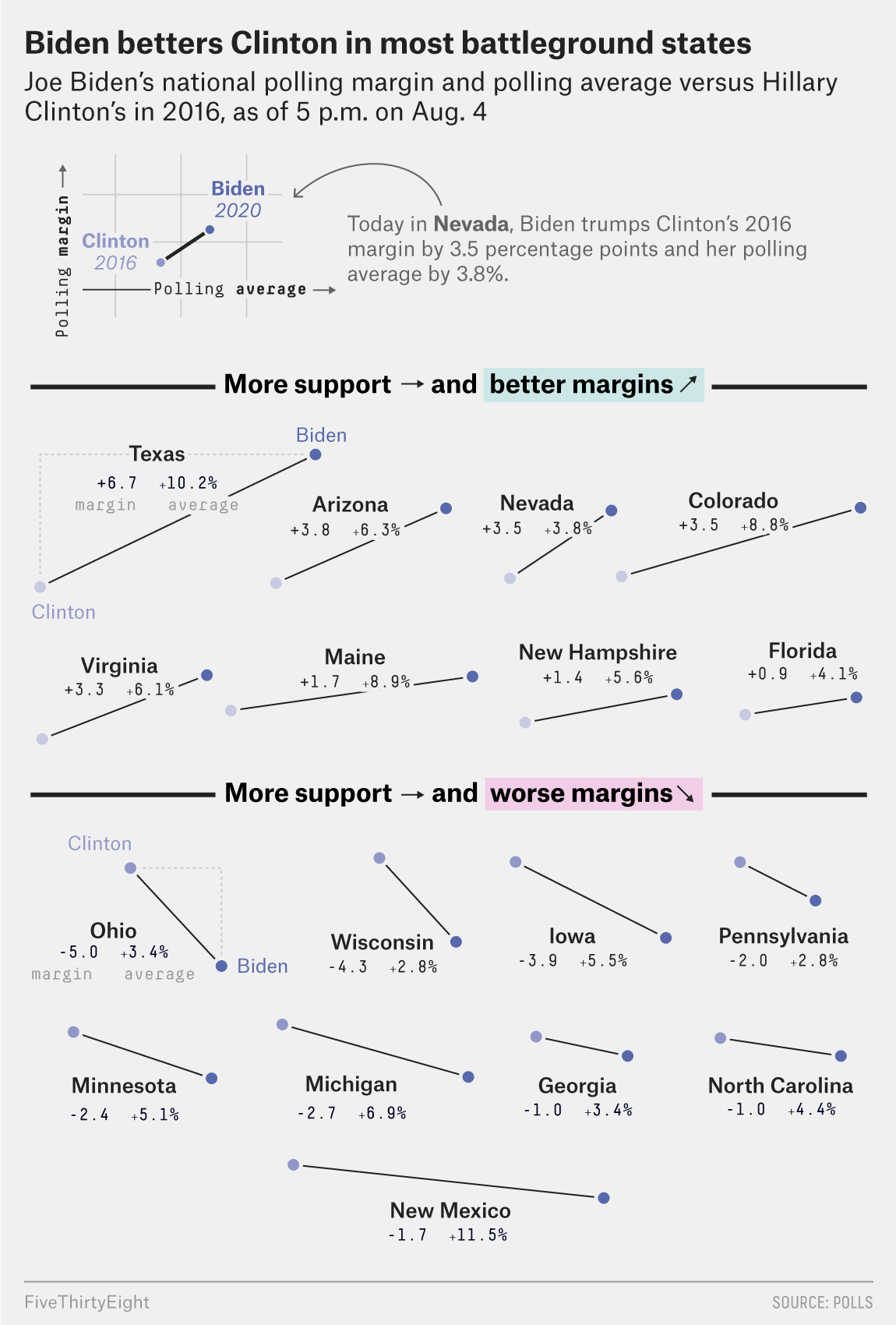 Let’s start with the eight states where Biden has more support and better margins. These are states where Biden is doing much better than Clinton, even at her peak. In Arizona and Texas, for instance, Biden is attracting about 6 to 10 more percentage points in total support than Clinton and has consistently topped her margin against Trump. In other words, Biden may actually be a slight favorite in Arizona and Texas may end up a toss-up, which definitely wasn’t the case in 2016. And in a perennial swing state like Florida that has shown signs of getting redder in recent years, Biden is attracting about 4 more points in overall support, and his margin over Trump is better, too. If Biden were to win Florida, that would undoubtedly narrow Trump’s path to reelection.

But there are also nine states where Biden’s margin over Trump is smaller than Clinton’s was at this point in the campaign. In Michigan, Pennsylvania and Wisconsin, for example, Biden’s margin over Trump is about 2 to 4 points smaller than Clinton’s was. But he’s also at or very close to 50 percent in each of those states, which wasn’t the case for Clinton. Still, it’s notable that Biden’s margins tend to be lower than Clinton’s in many Rust Belt battleground states. That could be due to Trump’s resiliency in the region, but also perhaps a shift in the pollster methodologies: In 2016, many polls in these states underestimated Trump’s support in part because they didn’t weight by education, an important consideration as white voters without a college degree broke strongly for the president.

All in all, national and battleground state polling at this point suggests that Biden is in a better position to win 270 electoral votes — and the presidency — than Clinton was at this point in the cycle. Just consider this simple arithmetic: If we take all the swing states in which Biden leads by at least 5 percentage points and add their electoral votes to those from the “safely blue” states that always go Democratic, Biden has 307 electoral votes.2 So if the race were to tighten by a few percentage points and Biden were to lose every other state, even the ones where he currently holds smaller leads — such as in Arizona and North Carolina — Biden would still win the presidency. That’s a much cushier margin than Clinton’s 272 electoral votes at this same point in 2016.

That said, while fewer undecided and third-party voters will likely make the polls less volatile and therefore decrease uncertainty, other factors unique to 2020 add uncertainty: namely, the novel coronavirus, the economic collapse and the nationwide scramble to make voting safe during a pandemic. There’s a long way to go in this campaign. We still have to see how the public responds to Biden’s vice presidential pick and the party conventions. We don’t know what course the pandemic will take or how the economy will change. For now, the fallout from the coronavirus appears to be hurting Trump’s chances, but that’s not written in stone — and neither is Biden’s sizable edge. If the race tightens a little, Biden would likely still be a decent favorite. If the race tightens more than that — and it could — Trump can win a second term.