During most of Donald Trump’s presidency, Congress was in a state of persistent deadlock, passing relatively few big pieces of legislation. But the Republican-controlled Senate stayed humming, nonetheless — thanks to a steady stream of judicial nominees from the White House.

After only one term, Trump filled 28 percent of vacant seats on the federal bench, including 27 percent of active federal district court judges and 30 percent of active appeals court judges, not to mention three Supreme Court justices. This figure is far higher than for other recent presidents in their first terms — by January 2013, for instance, Barack Obama had appointed just 17 percent of the vacant federal judge spots, and at the end of his first term, George W. Bush had appointed 21 percent. In fact, Obama was able to appoint only a slightly larger share of the federal bench in his eight years in office (31 percent) than Trump managed to do in his one term.

Trump also managed to radically alter the makeup of the courts. His appointees are not only far more conservative than other presidents’ picks but far less racially and ethnically diverse. They’re also fairly young — the median age for Trump’s appellate judges at confirmation is 47 — so given that the median retirement age for appellate judges is 67, these appointees could end up serving for decades to come. And even though Democrats now maintain narrow control of the Senate, putting President Biden in a much better position to make his own stamp on the judiciary than if Republicans still held the majority, Trump’s effect on the courts could be difficult to undo.

Federal judges have long been unrepresentative of the population they serve. But over the past few decades, presidents of both parties have made concerted efforts to nominate a more diverse slate of judges, with each president steadily building on the work of the last chief executive of his party.

That is, until Trump.

As the chart below shows, only around 16 percent of Trump’s appointees to the federal district and appellate courts aren’t white. That’s slightly lower than the share of Bush’s nonwhite appointees (18 percent) and a whopping 19 percentage points lower than the share of Obama’s nonwhite appointees (36 percent), according to data from the Federal Judicial Center, a research-oriented arm of the federal courts that collects biographical information for federal judges, including their race, ethnicity and gender.

Trump did appoint a higher share of Asian American judges than any other past president except Obama. But, overall, Trump’s appointees are largely white. That record is in many ways a throwback to the 1980s, when only a tiny proportion of judges were racial or ethnic minorities. The implications of this are far-reaching, however, for the people who appear in court before these judges: Research suggests that a whiter, more heavily male judiciary is likely to be less sympathetic to people of color and women on legal issues related to race and gender.

There is a little more gender diversity among Trump’s appointees, though: About one-quarter (24 percent) of the judges he’s named to the bench are women, similar to the share of G.W. Bush’s appointees (22 percent). However, this is still significantly lower than the share of female judges confirmed under Obama (42 percent).

A heavily white judiciary isn’t just a symbolic statement either. Several scholars who study the courts told FiveThirtyEight that a lack of diversity among judges can have a serious impact on how the courts are viewed. According to Princeton professor John Kastellec, having more nonwhite judges boosts confidence in the courts, which is not a trivial thing considering the federal judiciary is an unelected branch of government and must rely on public goodwill to ensure its decisions are respected and carried out.

There’s also evidence that having more racial and gender diversity among federal judges actually influences the kinds of decisions that are made. This dynamic tends to emerge in cases involving race or gender issues — like affirmative action, voting rights, or employment discrimination — which might not make up the bulk of any given court’s docket but can still be consequential. In one study, for instance, Kastellec found that in cases related to affirmative action, the presence of a single randomly assigned Black judge on a three-judge appeals court panel1 resulted in a more liberal outcome, independent of the judges’ political ideology. In fact, Kastellec told us, “the effect of adding one Black judge was greater than the effect of adding two Democratic white judges.”

Christina Boyd, a political science professor at the University of Georgia, has found similar effects for race in cases involving affirmative action and voting rights at the district court level. Female judges were also more likely, according to Boyd’s research, to side with plaintiffs in sex discrimination and sexual harassment cases, and there have been similar findings at the appellate level. “It makes a concrete difference when the judiciary isn’t just monolithically composed of white, male judges with similar backgrounds,” Boyd said. “It’s not an effect we see in every case, but it’s one that we see in cases where the judges bring unique information and experiences to their roles, perspectives that white men don’t necessarily have.”

One big reason that Trump’s picks tended to skew so heavily white and male, though, was that he and then-Senate Majority Leader Mitch McConnell prioritized appointing a raft of reliable ideological conservatives above all else. That pipeline is pretty limiting. “If you’re talking about potential Republican judges, the bench or the farm team, if you will, is pretty overwhelmingly white,” Kastellec said. And Trump’s nominees have certainly been very conservative. In fact, an analysis of the Judicial Common Space scores, a commonly used metric of appellate court ideology, shows that Trump’s appointees to the circuit courts are more uniformly conservative than any of his recent Republican predecessors’. 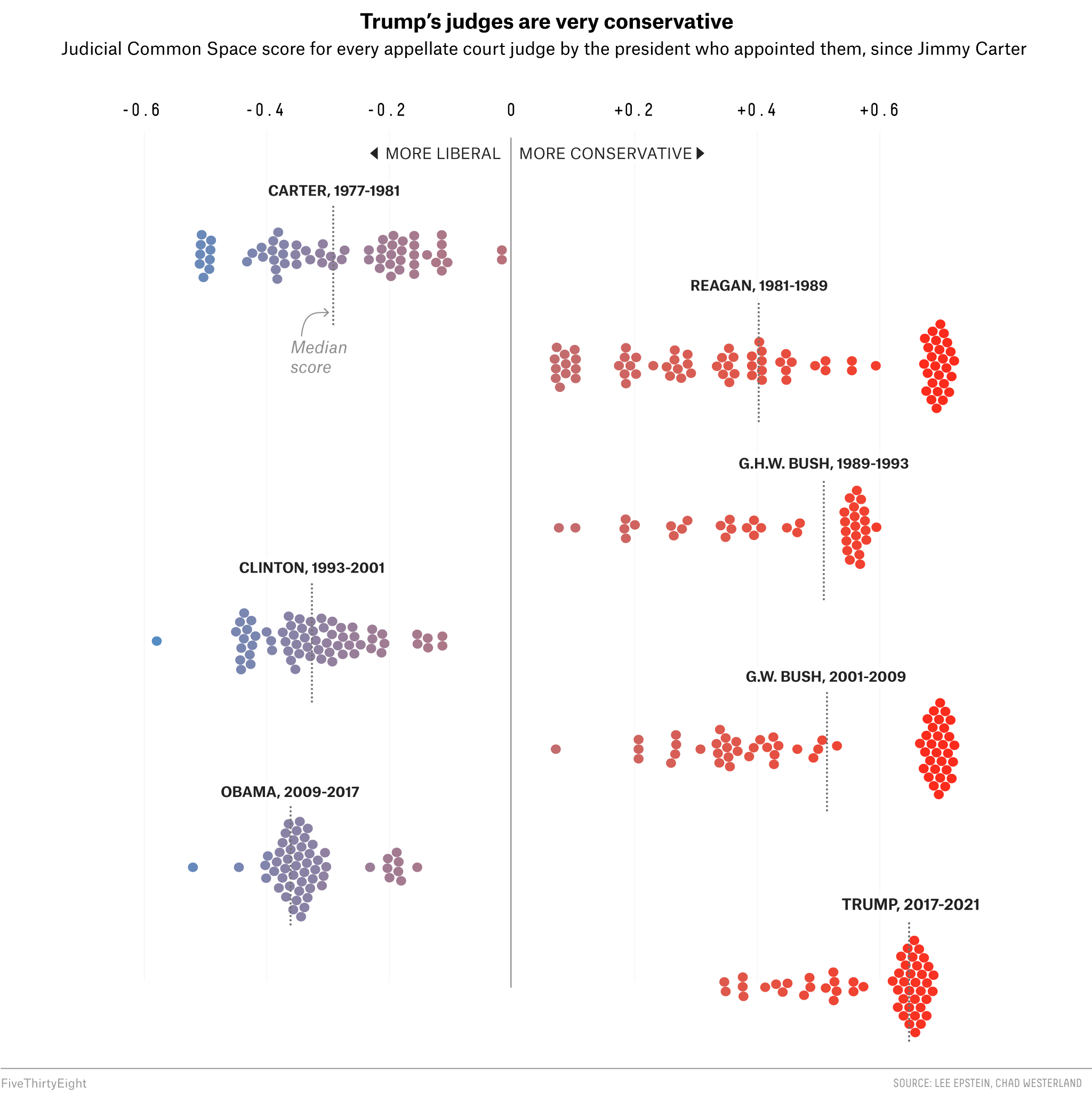 That shift is staggering, but it isn’t entirely due to Trump. It’s also the product of decades of political polarization and acrimony surrounding judicial appointments, which culminated in the Democrats’ 2013 decision to change Senate rules to end the 60-vote requirement for an up-or-down vote on a lower-court nominee. Then Senate Republicans took this one step further when they won full control of the government in 2017 and eliminated the tradition allowing senators to veto appellate court nominees from their home states, regardless of their party or the president’s party. This essentially removed the need for much of the compromising and deal-making that had happened behind the scenes in the past, according to Sarah Binder, a political science professor at George Washington University who has studied the judicial confirmation process. “It basically opened the floodgates for Republicans to nominate and confirm a steady stream of exceedingly conservative and exceedingly young judges — people who would have been very unlikely to make it through the process in the past,” Binder said.

As a result, after four years, the balance of power on several pivotal appeals courts has changed in noteworthy ways. For instance, Trump has now appointed five of the 13 active judges on the 2nd Circuit Court of Appeals, a traditionally left-leaning circuit court based in New York City that covers New York, Connecticut and Vermont.2 And while some courts, like the 1st Circuit Court of Appeals, remain dominated by liberals, Trump made inroads in another historically left-leaning circuit — the West Coast-based 9th Circuit — appointing 10 of the 29 active judges on the court, which has moved the median to the right and substantially raised the odds of drawing a panel dominated by conservative judges.

“Presidents can really have an impact if they can remake a specific, powerful circuit,” said Chad Westerland, a political science professor at the University of Arizona and one of the creators of the JCS scores. “That’s what Trump has come close to doing with the 2nd Circuit. And because his appointees are so young, the impact could be with us for a very long time.” (Trump’s appointees also shifted the balance of power to the right on the 3rd, 7th, and 11th circuits.)

Admittedly, serving only a single term has limited some of Trump’s successes in the courts. Westerland pointed out, for instance, that while Trump was able to appoint nearly as many appellate judges in four years as Obama did in eight, Trump flipped fewer circuit court seats. Only a third of his appointments were to seats previously held by judges named by Democrats, whereas nearly half of Obama’s appointments were to seats previously filled by Republicans. “One of Trump’s biggest impacts, ironically, was to somewhat erode George W. Bush’s legacy in the courts by replacing a lot of his appellate judges,” Westerland said. (In fact, 34 percent of Trump-appointed appellate judges took seats that had been vacated by G.W. Bush appointees.) Westerland did acknowledge, though, that because of their extreme conservatism, Trump’s replacements could still push the courts to the right — particularly in blue states where Democratic senators used to have more influence over who was nominated.

In many ways, Trump’s success in the courts could be a model for future presidents who want to leave their own judicial legacies. But the reality is it will be hard for Biden to replicate what Trump has done. For one thing, Trump came in with a significant number of vacancies to fill, thanks to Senate Republicans’ broad-scale refusal to consider Obama’s judicial nominees in the last two years of his presidency. Biden, on the other hand, has far fewer judges to appoint immediately.

Not all the Democratic-appointed judges who are eligible to retire are guaranteed to do so, though. And while replacing a slew of left-leaning judges would shore up liberal majorities on some appellate courts and give Biden an opportunity to inject more diversity into the federal judiciary, it won’t undo the overall conservative shift that occurred under Trump. Biden will also likely struggle to appoint judges who are as ideologically extreme as Trump’s, because the Democrats’ control over the Senate is razor-thin and moderate senators may push for more middle-of-the-road judicial choices. “I think the Democrats will have to stray away from ideologically extreme nominees in order to get the votes of senators in the center,” Boyd said.

The end result is that the judiciary’s conservative tilt is likely to persist through the first few years of Biden’s presidency, even if it gets somewhat more diverse — which could be an enduring thorn in Biden’s side, particularly as it pertains to his administration’s ability to make aggressive changes through executive orders or regulations.

And on a day-to-day basis, Trump’s transformation of the judiciary will, of course, make a big difference for the people whose cases filter through the federal court system over the unfolding years or decades, with potentially significant consequences for criminal sentences, the fate of voting rights protections, and the success of employment discrimination lawsuits.

“There’s so much focus on the Supreme Court, and that’s for good reason, but I think in the process we forget that in a year when the Supreme Court takes maybe 60 or 80 cases, lower court judges are making tens of thousands of decisions that really, really matter for litigants,” Westerland said. “That impact might be hard to quantify and track, but it’s very real.”